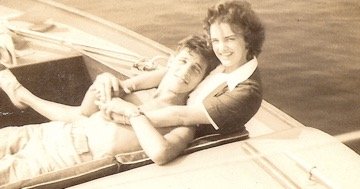 — Looking to the Greatest Generation for Inspiration —


As we hit another Memorial Day, there are fewer and fewer World War II Veterans to share their stories of one of the most frightening and uncertain times in our world history.

I have long been fascinated with the time period of the 1940s and how ordinary citizens around the globe did extraordinary things to fight looming dark powers.

If just a few small details in history had been different, we might have actually been living in an alternate version of the United States—a Philip K. Dick “Man in the High Castle” world, where the country is split into the “Japanese Pacific States” and the “Greater (or Fourth) Reich.”

But, it was because of the passion and bravery of people like my grandparents that we are enjoying the freedoms that we have today in the United States and many other parts of the world.

However, if you ask any WWII Vets, they do not see themselves as “heroes.” From their eyes, they were just doing what was right and what needed to be done. 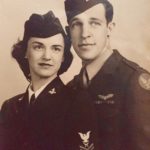 My maternal grandfather enlisted at the age of 23 as a cadet in the U.S. Army Air Corps. He ended up piloting B17 planes and just barely survived 28 missions over the European front. Every time they left the base, there was about a 50/50 chance of returning.

Not one to sit on the sidelines, my maternal grandmother enlisted as a Navy W.A.V.E. and was stationed in New York City with top secret clearance as a secretary to an officer in the U.S. Postal Service delivery unit where they were entrusted with carefully getting letters and packages to the troops in the field—at their undisclosed locations.

My paternal grandfather enlisted in the U.S. Navy and was at the Invasion of Sicily and then on the Pacific front—and for a time was working in the radio room with Pulitzer Prize-winning journalist Ernie Pyle, not long before Pyle was shot in the Battle of Okinawa. They called the U.S.S. Biscayne “the lucky ship” because of how many near misses it had. 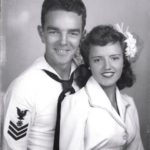 I was honored to know all of my grandparents into my adult life. Sadly, they are no longer with us, but the love and character that they instilled into our families does continue to endure. Both sets were married over 60 years and considered their families as their number one priority.

When my maternal grandfather passed away on June 6, 2007 (that’s D-Day—ever the patriot!), I heart-wrenchingly wrote his eulogy, and these were some of the lessons he taught us that I shared that day:

5. Know that you can do anything that you set your mind to.

6. Keep a positive outlook—no matter what you are faced with.

7. Love your family unconditionally and first.

8. Have a sense of fairness.

9. Be thankful for what you have, even it it’s just one orange sweater.

11. Carve the turkey with the grain of the meat.

12. Be flexible and roll with the punches.

14. Keep your problems to yourself, because when it comes down to it, at the end of the day, no one else really wants to hear about them, and you’re the one that has to solve them anyway.

15. Stay active—especially with sports like tennis and golf because you can play them forever.

16. Enjoy a good martini or glass of sherry with good conversation.

17. Keep an open mind. You’re never too old to learn something new.

18. Evolve with the times and adapt to new technology.

19. Women deserve to be treated with courtesy and respect.

20. Fight for what you believe in.

21. Do some kind of service for your fellow brothers and sisters.

23. Go for a ride with the top down when the sun is shining.

Some of my favorite relationships on this planet have been with members of the Greatest Generation. They have a gift for rolling with the punches and keeping their spirits up at all costs. They understand that “life happens” and it’s how we roll with it that is most important.

So, this Memorial Day, it’s an honor to reflect on the incredible sacrifices that those before us made so that we could be afforded to have the freedoms that can also be so easily taken for granted.

Most importantly, the biggest lesson the Greatest Generation taught us is that how we live does leave behind a lasting impact on the generations to come.

In the words of Lin Manuel-Miranda from “Hamilton”: “Who tells your story?”

And what will your legacy be?

FACT:  Men and women who fought and won the great conflict are now in their late 80s and 90s. They are dying quickly—according to US Department of Veterans Affairs statistics, 558,000 of the 16 million Americans who served in World War II were alive in 2017.

NOTE:  In my journey of researching my grandparents’ experiences during the war, I found two wonderful resources. One vet, Stanley Morrison, who served with my paternal grandfather on the U.S.S. Biscayne wrote “Letters Home” about his experiences on the ship. And another vet who is still with us, James Lee Hutchinson—who was also stationed in Chelveston, England, where my maternal grandfather was stationed (although they didn’t know each other)—has written many books about being an air man in the Mighty 8th.

Main Photo Caption: My maternal grandparents in 1944, after my grandfather completed his 28 missions as a B17 pilot.

Search The Site
About Me

I'm Heather Burgett, an award-winning publicist, entrepreneur, and business mentor with over 20 years of public relations and marketing experience.